Since I started this look at China and our reliance on them for some of our vital goods and equipment, as well as our reliance on them to buy our raw materials like coal, iron ore, beef and wine; the relationship between Australia and China has deteriorated considerably.

The outburst by the Ambassador of China, threatening our beef, wine and tourism relationships, simply because our government made a valid request that a pandemic that has brought this world into lock-down should be investigated and the source found, was nothing short of Imperial bullying from the Middle Kingdom.

The United States sent its war ships into the South China Sea a few days ago. Whether in retaliation or not, reports are that China has sunk a Vietnamese small boat, probably fishing; has rammed boats from Malaysia and locked its radar onto a Philippine warship, which is hostile and usually means you are about to be fired on.

This means that China is quite prepared to escalate tensions in the South China Sea in an effort to distract the world away from asking the question China must answer regarding the origin of Corvid19 from Wuhan.

It must be determined whether Covid19 came from the wet market, or escaped from what appears to be a very insecure laboratory in Wuhan. China owes that information to the world. 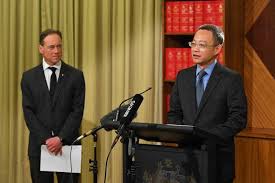 As I write, the situation has changed again. Andrew Forrest a man who I have defended many times on social media, yesterday high jacked a press conference organised by our Federal Minister for Health, Greg Hunt, a conference called to thank Forrest for organising medical supplies from China, which it turns out Forrest will be repaid the cost by the federal government, so it wasn’t philanthropy as I had first thought.

Forrest blindsided the minister by calling on a Chinese diplomat he had with him to speak on behalf of China. The Australian newspaper has traced the diplomat to his former position in some propaganda and cyber bureau in China.

In the Australian of April 30 there are more reports of tension escalating in the South China Sea. China claiming it has ‘repulsed’ an American warship and America denying anything happened.

It must be noted that if for any reason China closes the South China Sea, even if just for a few weeks, fuel supplies in Australia will be in jeopardy. We are heavily reliant on Japan and South Korea for our fuel oils. We have less than 30 days fuel in the country. To get crude into those two countries and to get fuel out the South China Sea must be open to international shipping.

I was reminded the other day of Marketing 101 when looking at the dependence of the iron ore industry in Australia on the Chinese market.

One of the first laws of any business is not to build a market on just one customer and if you can possibly help it on just one product. Mr Forrest take note. Australia take note. Farmers take note.

In Episode 1 of  ‘China Friend or ? we looked at the top ten or so big ticket items which we imported from China in 2018. I had a look at the numbers for 2020 and they are down on the 2018 numbers, which I suppose is to be expected, what they are for 2019? I don’t know. After all, these numbers are indicative of the growth in our dependence on China, the consequences of which we are examining.

Ninety per cent of Australia’s merchandise imports are from China and, of those, 90% are elaborately-transformed manufactures. The initial imports of textiles, clothing and footwear were replaced by household appliances in the 1990s; today 50% per cent of Australian merchandise imports from China are engineering products, including office and telecommunications equipment.

The development of manufacturing in Asia has been a major reason for Australia’s failure to compete in many areas of manufacturing. As China moves up the value chain, more industries will be subjected to this competition. This may be ameliorated by a shift in the focus of the Chinese economy away from exporting to domestic consumption.

(Those Statistics are, I think, (waiting for clarification, but the ABARE must be working from home) from 2015 when our imports from China were about $49 billion. In 2018 our imports were $77 billion. (See below Ed)

In Episode 1, I mentioned at the top of the list the huge amount of electrical good we imported from China in 2018, some $13 billion and commented that must account for mobile phone and TV sets, but I was told the other day that as we have been building some 100,000 houses a year that many of the items that have gone into those houses like switches, plugs and sockets, light fittings and cable, will have come from China. I checked around my house and it is true. I can’t remember who made them before, must have been in Australia surely?

It is quite sobering to wander round Bunnings or one of the major lighting,  plumbing  and independent hardware outlets and just look at the labels. We import, I am told, 60% of the nails and nuts and bolts we use and we mine the iron for goodness sake and can’t make nails!

What I want to do now is have a look at what we could or should make here in Australia which will give us a new industry and manufacturing base. The list below is a start. The rest, all the smaller imports will also surprise you.

Aluminum and aluminium are one and the same thing, you say tomato and I say tomato, that sort of thing. I have used an exchange rate of .75 from US$ to A$. That was the average exchange rate for 2018. The numbers in the table are $US and in the text I have changed them to A$.

In 2016 an estimated 57.6 million tonnes of Aluminium were produced. This is more than all other non-ferrous metals combined. Australia mines bauxite in Queensland, Western Australia, the Northern Territory and Tasmania and is the world’s largest bauxite producer. Australia is also a world leader in the production of alumina and aluminium. The three Western Australian refineries supply 45% of Australia’s alumina and 11% of the global total, making them the largest single source of alumina in the world.(2016 stats Ed)

I don’t know much about these industries but I imagine the only reason we get therse things from China is, like everything, on price. We have seen the consequences of relying on China for medical apparatus, particularly if that includes clothing, that probably comes under clothing misc. If it is apparatus that requires service and spare parts then we do have a problem, because if we cannot maintain then whatever they are become useless.

The world it seems has all of its sports shoes, sneakers and the like made in China. Australia imports over a A$1 billion of these goods a year. Going down the list of goods we get from China I cannot help but wonder how much of that list we could make here in Australia. For instance why do we have to buy our travel goods and leather articles from China. Paper and paper board? We export wood chips for paper and import the paper back, value added again.

It might pay to go back and have another look at Episode 1 and have a look at the big ticket items again. Billions of dollars are spent importing furniture, per-fabricated buildings. Ask Twiggy (China) Forrest about that one the Chinese built him a village to house hundreds in the Pilbara, put it all into containers and sent it over here to be erected.

I have used economic advice and numbers generated by economist and farmer Ben Rees many times on these pages. He is a wise man. He has just written a paper which can be found on this very good site: https://farmersfirst.net/covid-19-structural-reform-debate/

It may seem a little heavy going at times, remember in economic language unity has a value of 1. Stick with it and you will find it very thought provoking, and if Ben is right, and he is seldom wrong, the unemployment figures he is forecasting are scary and expensive.