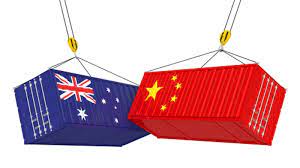 Previously in the  The Global Farmer ‘ I posed the question Is China to Australia what Russia is to Europe?’ I discussed Australia’s reliance on China for being by far Australia’s biggest export market. The heavy burden of dependence that the economy of Australia places on its  mining industries is not often talked about by the majority of Australians. Maybe that is because it can cause a few uncomfortable thoughts, mainly what would happen if China stopped buying from Australia? What would be far worse though, is what would happen if China stopped supplying Australia?

The Five Eyes nations gather and share intelligence from around the world.

A study by a UK think tank, the Henry Jackson Society, last year examined the dependency of the Five Eyes countries—the US, the UK, Canada, Australia and New Zealand— on China and found that Australia was by far the most exposed. The Strategist.

Europe is Exposed and it Hurts.

The political leaders in Europe, when they signed up to be reliant on Russia for fossil fuels, they gambled the welfare of some 400 million people and their industries, on being treated ‘properly’ by the communist Vladimir Putin and his Russia.

Europe knew full-well what Putin was like, they must have calculated the odds; they knew the character of the man and what he was capable of, but they trusted him just the same. Now Europe is being forced to accept a high price for trusting an ex KGB officer who became the ruler of the biggest country in the world.

Why Angela Merkle of Germany, Emmanuel Macron of France and the leaders of the other 25 countries in the EU trusted Putin, only they know. Apart from the Balkans War in the nineties there hasn’t been a major war in Europe for eighty years or so, but Europe knows war, it is written deep in their history, it is as if it is in their DNA.

END_OF_DOCUMENT_TOKEN_TO_BE_REPLACED

Is this the end of Globalisation and Interdependence? What it Means for Australia’s Future.

The world has been thrown into turmoil by the brutal Russian invasion of Ukraine. Every day as the Russians retreat, the bodies of men women and children, summarily executed, are found in mass graves or buried in back yards. Men with their hands bound, women raped; by the day  it looks less like war and more like genocide. Europe is in shock because it cannot survive without Russian gas (LNG), coal and oil. Europe is Russia’s biggest customer for fossil fuels.

In an attempt to frustrate Russia’s invasion the world has placed sanctions on Russian exports of everything except fossil fuels. The world has frozen the accounts of Russian banks and all currency transactions. All Russian imports and exports have been stopped. The international community has frozen or repossessed the property of all the Russian billionaire oligarchs and their families, together with the assets of Russian politician’s and their families.

Russia is threatening to cut off gas (LNG) supplies to Europe unless they are paid in Russian roubles instead of Euros and Europe has said no, the contracts are in Euros. Europe knows the gas won’t be turned off because Russia needs the money.

Since the invasion began EU countries have paid the Russians €35 billion for gas compared to €1 billion it has given to Ukraine to defend itself. There is ample evidence that many countries in the EU are finding their own way, not Brussels way in this crisis and there are concerns that this show of independence may reduce the long-term value of the EU as a political force.

So much for interdependence and globalisation, particularly in Europe. It should keep national leaders awake at night struggling with the distressing realisation that they are funding the Russian invasion of Ukraine and so funding the killing of men, women and children, and at the same time they are sending rockets, missiles, ammunition and other articles of war to Ukraine, so they can kill Russians.  How mad can the world get when you cannot manage your life without imports from your enemies?

END_OF_DOCUMENT_TOKEN_TO_BE_REPLACED

For the sake of future generations, Australia must not give away its birthright for  a mess of pottage.

I wrote the following after a long  on-line discussion.  It was the culmination of a larger debate about the real cost of renewable energy. I have tidied up a few phrases for clarity.

Thank you for your considered replies. I am in my eighties. My profession is agriculture from farming to science to agribusiness.

I have watched this country change substantially over the last 50 years or so. That we have largely lost our ability to be self-sufficient in some of the vital parts of our economy concerns me greatly.

Manufacturing jobs have been exported, it started way back when, when it was to Japan because their labour was cheaper than ours. Then there were others others like Taiwan, Singapore, Korea and Russia for wool. Now we have China.

Fifty years ago , even twenty years ago we were self sufficient in oil, now our position is strategically fragile because the majority of our oil has to make two trips through the South China Sea and there is tension on that sea as China builds artificial islands.

There was a time we were self sufficient in food, now we rely heavily on imports, our food processing and manufacturing industry has fled due, in the main, to high power costs, much of it has gone to NZ, where they now process Chinese produce and then send it here — we eat frozen Chinese fruit and vegetables.

END_OF_DOCUMENT_TOKEN_TO_BE_REPLACED

The news that China accounts for thirty percent of Australia agricultural exports demonstrates how reliant the Australian rural economy has become on the People’s Republic of China.

That news caused some to question the wisdom of the marketers of Australian food and wine in placing such a heavy reliance on just one customer.

That is valid question, but  did you know that  China buys 30% of everything Australia exports.

Agricultural exports are just a mirror image of what is going on in the rest of the country. In 2017-18 Australia exported goods and services worth a staggering $123 billion to China equal to 6.7% of the Australia Gross Domestic Product.