In 2018 Australia imported goods from China to the value of US$57.7 billion or A$77 billion with an  average exchange rate of .75 That is nearly $6.5 billion a month, every month.

It came as a shock to almost everyone to learn recently that we import over 90% of the medicines we use and most of them come from China and America. If China doesn’t make the final product they do make many of the ingredients. This alarming fact may never have come to light without the outbreak of the COVID19 corona virus. If China stopped supplying us and or America with medicines, what would we do?

We no longer live in a world of ‘It can’t happen here’ Because we know it can. We rely on China for so much; over US$13 billion in electrical goods — that must be most of our TVs and phones surely? Is this a danger to our independence and sovereignty?

END_OF_DOCUMENT_TOKEN_TO_BE_REPLACED

In 2018 the National Farmers’ Federation of Australia, set a goal for Australian agriculture to achieve production at the farm gate worth $100 billion by 2030. The production in 2018 was some $57 billion.

This is what I wrote for Episode 1 in The Global Farmer in December of last year:

That ($100 billion) is an increase of 66.6% on the production of 2018 or an annual increase of about 4%, and presumably, though they haven’t said as much, they all expect the producers to make a profit every year— which is more than they do now — but they don’t tell you that.

There are some truly grim truths about the financial ill-health of Australian agriculture and they are all produced by government statisticians and the Reserve Bank of Australia.

I then go on to dissect agriculture in Australia as it is now, warts and all. I look at debt levels and question whether they are sustainable. I note that as farms have got bigger, productivity has decreased and debt has increased. Skills are being lost at an alarming rate.

Cereal yield increases are not  keeping up with inflation and the real value of wheat is declining and according to research in 2019 our producers have high costs and low yields when compared to other countries. Cereal farmers in the low yielding areas are having difficulty making a profit year on year; some if at all.

The statistics are blunt and uncompromising.  They are the sort of numbers that not many producers like to recognise in public, but they are true and factual and researched by the profound Ben Rees, an Ag economist  and farmer with over 50 years experience of agriculture and economics; Ben tells it as it is.

It would beneficial and help with understanding the perspective of this article which is Episode 2, to first read what I wrote in Episode 1 in December 2019.

This article may also at first glance seem to be at odds with what I have  written recently, regarding the $18 billion, we are spending on imported food every year—but it isn’t, the reason being that what is discussed in this Episode is food which is surplus to our requirements in Australia, at least at the moment.

The population of Australia will increase by about 300,000 a year or 3 million by 2030 an increase of 12%. Unless production increases, exports will decrease as we feed more people and food imports will increase.

END_OF_DOCUMENT_TOKEN_TO_BE_REPLACED

By the end of World War II Britain had amassed an immense debt of £21 billion (£912 billion at 2020 value). Much of this was held in foreign hands, with around £3.4 billion being owed overseas (mainly to creditors in the United States), a sum, which represented around 30 per cent of annual GDP.

Britain settled the last of its World War II debts to the US and Canada in 2006, 75 years after they were incurred.

Due to the pandemic fiscal stimulus Australia’s net debt will increase by a third this year, swelling to roughly $507 billion by the end of June 2020, which is 26 per cent of annual GDP.

“If farming were to be organised like the stock market, a farmer would sell his farm in the morning when it was raining, only to buy it back in the afternoon when the sun came out.” John Maynard Keynes.

Britain was unprepared for War in 1939.

In 1939 the British were totally unprepared for war, just as we are to fight a war against the corona-virus (COVID 19) pandemic of 2020. We are also an island nation like Britain.

It is a revelation to many that we import, mainly from China and America, ninety per cent of the medicines we use. We are dependent on others for our health or, to put it another way, others could make us sick by denying us the medicines we need to stay alive.

In April last year I wrote on this site that we had less than thirty days fuel, petrol, diesel, AV Gas etc in this country, and that includes the ADF reserves. We depend on the Gulf of Hormuz remaining open and we depend on China allowing our tankers in and out of the South China Sea for the majority of our fuels. Nothing has changed, we still have less than a months supply of fuel in this country. 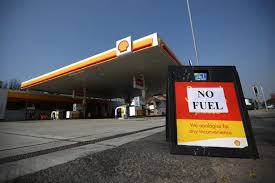 Life would be difficult without adequate medicines and even more difficult if not impossible with little or no fuel.

It would become damned hard without imported food. It is a nonsense to claim that we are self sufficient in food, because we are not, far from it.