Skip to content
Senate inquiry is a chance to reconstruct farm industries.

Farmers struggling with poor prices, difficult weather conditions, and mounting debt, have an opportunity to propose solutions, in submissions to a Senate inquiry that is being held in coming weeks.

The Senate is inquiring into a Bill that was introduced late last year by Senators Nick Xenophon and John Madigan, to establish an “Australian Reconstruction and Development Board” (ARDB) under the Reserve Bank.

The ARDB would have the task of forming and implementing rural reconstruction and development policy.

The Reserve Bank of Australia already has the necessary regulatory framework, powers and relevant duties legislatively assigned to do this.

One of the instigators of the Bill is Condamine wheat farmer Rowell Walton, Chairman of the Rural Finance Roundtable Working Group.

This group was established in October, 2012, with the help of then treasurer Wayne Swan, who involved Treasury, the banks, and ABARES. Economists and farmers were also involved.

Mr Walton believes that without appropriate government intervention, many farmers, particularly family farmers will continue to be sold-up and will exit their properties at a faster rate than previously. 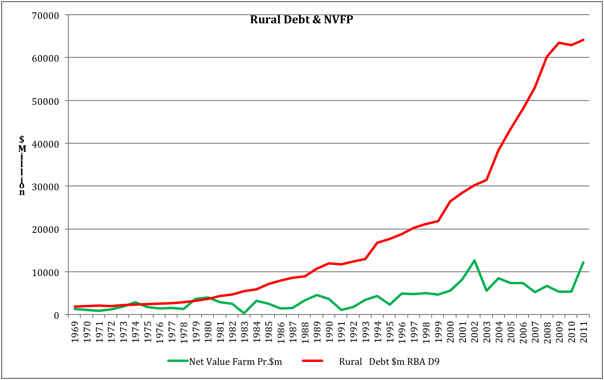 “If left untouched it will continue to precipitate dramatic effects, much worse in some places than others but more generally it seems across our entire nation.”

Mr Walton referred to farmers in Western Australia confronting their demise; some months ago it was assessed that among northern cattlemen, that 30% were in default; the dairy industry was dramatically contracting, with the Victorians asserting at the time some 40 farms had been forced to default and 10,000 dairy cows taken by banks; more recently a well-known auctioneer said that some 80 dairy farms had been sold in Queensland alone in the past 12 months, with the sell down unrelenting;

There was failing vegetable and horticultural production and manufacturing industries were suffering; there were extraordinarily thin or negative margins in most agricultural pursuits.

Mr Walton said the underlying problem of declining real returns have coincided with the removal of both marketing risk as well as seasonal risk in the changes to drought management and exceptional circumstances (EC) by the outgoing Federal government.

Mr Walton referred to a meeting with the Australian Bankers Association in Sydney, when it was quiet directly stated that the bankers had made the point to the government that in the event the EC was removed, subsequently severe difficulty would be visited upon primary producers.

“This logical prediction seems to have been ignored.”

Mr Walton has told the incoming Prime Minister, Tony Abbott that although the government has changed, the need for the ARDB still existed, and its necessity over time was increasing rather that decreasing,.

“It is now incumbent upon the new government to provide effective leadership to deal with our nation’s needs,” Mr Walton said.

The Bill introduced into the Senate is known as the Reserve Bank Amendment (Australian Reconstruction and Development Board) Bill 2013.

The Senate has referred Bill to the Senate Economics Legislation Committee for inquiry and report.

The Committee has invited submissions by February 10, 2014, and the Committee is due to report to the Senate by March 26, 2014.

He suggested the following should voice an opinion, even in a one page submission:-

The Senate Committee is seeking written submissions from interested individuals and organisations preferably in electronic form submitted online or sent by email to economics.sen@aph.gov.au as an attached Adobe PDF or MS Word format document. The email must include full postal address and contact details.