Skip to content
The battle in Court between two farmers from Kojonup is one of the saddest events in my career in agriculture, which now spans over half a century.

We, that is science, farmers and their advisers have fed twice the number of people we started with 50 years ago. Today some eat too much and others go hungry and starve to death. There is no shortage of food though, we just don’t get it to those who need it, we are too busy. Instead we fly over the countries with the starving millions and marvel at international travel, which will take us to the next banquet.

There are fewer of us every year who can remember in the dark days of WWII and the subsistence food rationing in Britain and to a lesser extent in Australia. In the UK rationing didn’t finish until 1954. Obesity was unknown.

Thirty years later Britain was a net exporter of food.

What I do know is that during my lifetime most insecticides, herbicides, fungicides and many other ‘cides’ have been invented. They, and we owe our very existence to science. It is science that has enabled the ever shrinking arable area on this earth to feed the ever increasing population. Have we made mistakes in that time? Of course!

Science by its very nature is experimental.

The alternative is starvation and rationing. Ration books and coupons. Hunger. Queues for simple things like bread and potatoes, and meat.

Why am I sad about Kojonup? Because it is a debate about the unimportant, which, as depicted in the picture, only the lawyers, the man milking the cow, can win.

In 2011-12, Australia exported $30.5 billion worth of food compared to food imports of $11.3 billion. Both sets of figures from ABS are provisional. 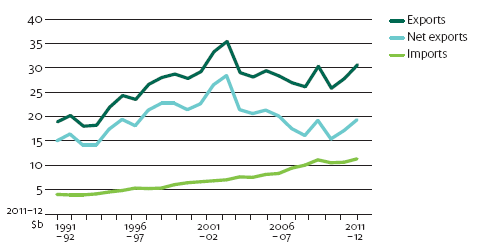 That is not a pretty graph. Instead of rushing off to Court to settle a tiff, as a farming community we should be asking, why? Why is this happening to us? Why are we just giving up and importing more? When will the blue and green lines cross?

We will always be able to feed ourselves with fresh produce as we do now, over 90% of our fruit and vegetables are home grown. The only way that could change is if for some strategic reason China floods the fresh food market by increasing their horticultural production by about 4%. That’s scary isn’t it?

The numbers do not lie; progressively the food we import will become more expensive because the worldwide demand for it will increase. It may well be happening now as we watch, without a murmur, our food processing industry disappear overseas or just close down.

Think we have cheap food? Look at this from ABS. It’s still good business in Australia to be pushing prices down, down, down, especially when imports are going up, up, up:

Retail margins of Australian and international supermarket chains 2010-11 a

Description: Column chart comparing retail margins of Australian and international supermarket chains in 2010-11. Woolworths’ food and liquor division had the greatest share in the Australian region, with under 8% margin, while Wall-mart led the international region with over 6%. 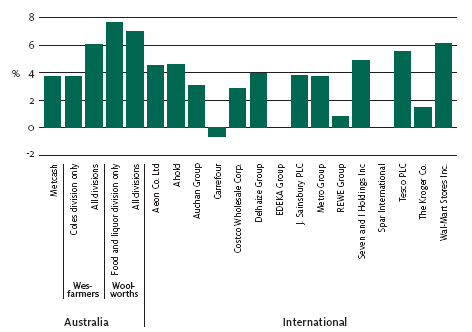