Skip to content
There is a paradox, an absurdity of enormous proportions happening in agriculture in much of the Developed world. In spite of the US$486 billion a year being paid to farmers in the 21 top food producing countries in the world – heavily subsidised farmers in the European Union (EU) have embarked upon a civil disobedience campaign, some of it has been violent and massively disruptive to the rest of society. Their problem is that in spite of being paid over US$100 billion a year in subsidies, they are going broke. Their costs are greater than their returns. Across Britain, France, Germany, the low countries – everywhere in Europe, mainly family farmers are saying ‘enough is enough.’  They are  taking to the streets and the supermarkets to show those who buy and consume the food what the difference is between what it costs to produce food, what the producers are being paid for it and what the consumers are paying for it at the supermarket. There is a sober lesson here for Australian agriculture as the value of the food we import goes up every year it is mostly from countries who subsidise their agriculture. According to the Worldwatch Institute, ‘Agricultural subsidies are not equally distributed around the globe. In fact, Asia spends more than the rest of the world combined. China pays farmers an unparalleled US$165 billion. Significant subsidies are also provided by Japan (US$65 billion), Indonesia ($US28 billion), and South Korea ($US20 billion).’

The value to Australian agriculture from Free Trade Agreements (FTAs) can be put into perspective when we contemplate having to compete against the home grown subsidised produce of much of Asia. If their ‘home grown’ produce, for instance beef, is subsidised, then to compete we have to be price competitive with a subsidised product – can we compete with subsidised agriculture? Only if we can sell at a price that is competitive, which may mean lower, than the subsidised product. For decades, since the seventies, Australian farmers have been duped by politicians of all colours and from agriculture, that ‘market forces’ and a ‘free market economy’ will eventually prevail. Fig 1 and Fig 2 (later) puts a lie to that propaganda and shows what it has cost. To compete we can see that Australian farmers ‘chased’ the ‘get big or get out’ mantra of the 70s with debt. More of that later.

As a child growing up in post-war Britain anything from Australian from wool to meat, to apples both fresh and dried, dried fruit and the delicious Sunday treat of Australian canned peaches, was a sign of absolute quality. The only exception to that rule was the processed cheese we were served in the army in the nineteen fifties. I am sure it had been imported during the war. Second World War, I think – maybe?

How times have changed. Britain is part of the EU, the European Union. This is what the EU say about themselves:

The EU is an attractive market to do business with:

That is a proud boast and if you look at the link you will see the truth of it. They are indeed a powerful union – even a nation. To protect their agriculture the EU pays their farmers subsidies amounting to about US$100 billion a year.

In ‘Farming on Line’  a UK farming journal came this alarming news on Wednesday 29 July 2015. Copa and Cogeca warned at the EU Milk Market Observatory meeting today that the EU dairy market situation has deteriorated rapidly in the past 4 weeks, and without EU action, many producers will be forced out of business by Winter. Speaking at the meeting, Chairman of Copa-Cogeca Milk Working Party Mansel Raymond said “The market is in a much more perilous state than it was 4 weeks ago, with producer prices far below production costs. It’s a critical situation for many dairy farmers across Europe”.

Who or what are ‘Copa’ and ‘Cogeca’? ‘Copa’ was formed in 1959 to represent farmers within what we now know as the EU, it had 13 affiliates at that time. It now speaks in Brussels for sixty farmer organisation’s within the EU and another thirty six affiliates like Norway and Turkey, outside of the EU, but in Europe.

COGECA’ s Secretariat merged with that of COPA on 1 December 1962.

When COGECA was created it was made up of 6 members. Since then, it has been enlarged by almost six and now has 35 full members and 4 affiliated members from the EU. COGECA also has 36 partner members.

So ‘Copa & Cogeca’ to our antipodean ears may sound like a dance from South America, is in fact a very powerful agricultural lobby in Brussels and the Parliament of Europe. Stuck down here at the other end of the world we tend to forget that Europe is now a bigger trading bloc than America and China.

French farmers are a passionate lot and in support of Copa & Cogeca, last month on warm summer days in the middle of the tourist season they dumped loads of animal manure in the middle of Paris and other cities. For those who don’t know what the machine below is, it’s a ‘muck spreader’. Normally filled with animal manure and coupled to the power take off on the tractor it ‘spreads’ the manure on the fields or paddocks. In this case it looks like it is being used to ‘clean’ windows – on a bank perhaps? 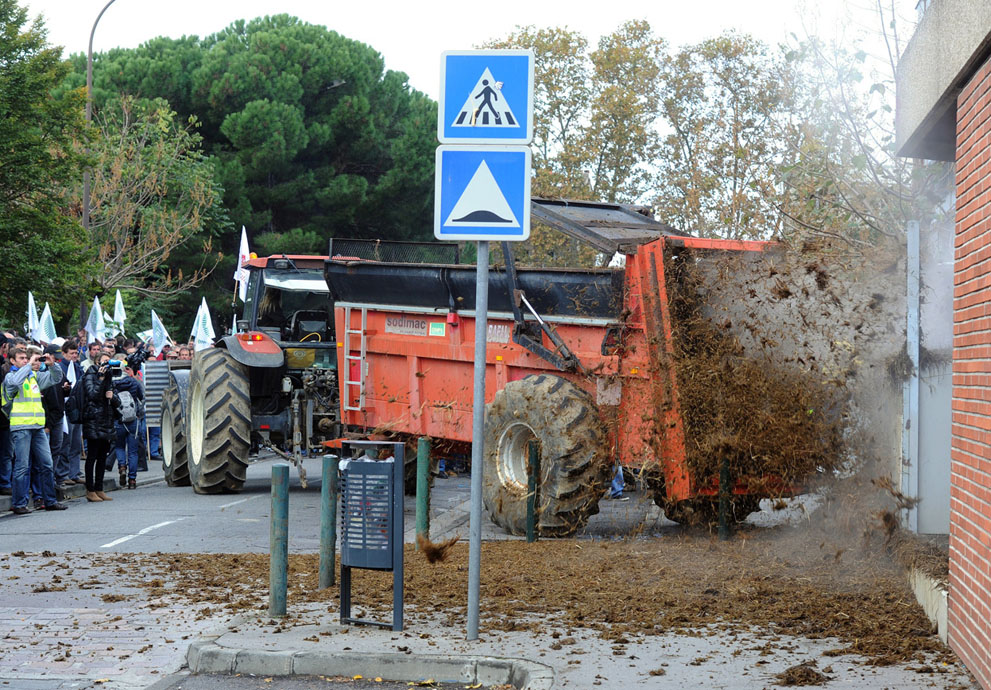